I remember our first trip alone as new missionaries in East Africa; we ended up at the end of the road, in total darkness and completely lost.

We had been in Africa for about two months but had never been outside of Nairobi on our own; we had made a trial run with another missionary to Musoma, Tanzania where we would be attending language school. We were given a few rules that were to be strictly adhered to when we made the trip on our own to Musoma. Our missionary mentor, Bob McCulley, looked at us sternly and said: “Never be out on the road at night and never take the lower road through the Rift Valley.” 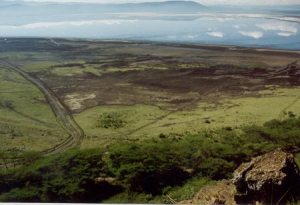 We left Nairobi later in the day than we had planned but it was decided that we had time to get through the Rift Valley and arrive at the other end safely before nightfall. Tim, Sarah, and I had everything packed tightly in the Land Cruiser. So tightly, in fact, that Sarah had to sit in the front seat between us. We headed out on our new adventure, we took the turnoff for the Rift Valley and bounced merrily along. After several hours, a very uncomfortable realization hit us, we were looking “up” at the higher road. This meant, of course, that we had taken the wrong exit and were traveling the forbidden and frightening “lower road.”

We had traveled to far to turn back, light was failing fast, and the road deteriorated as we continued. There were huge craters in the road that we literally drove down into and up the other side and we passed a number of large trucks turned over on the side of the road. We tried to stay calm so as not to frighten Sarah and prayed that the Lord would come to our rescue.

Eventually it was completely dark, no street lights or homes lined the side of the road; the only lights we saw were small specks of light in the distance that indicated homes sprinkled around the sides of the Rift Valley. The road continued to get narrower and narrower eventually came to a dead end marked by a road block. I cannot even tell you how the fear felt as it began to wrap itself around us making it seem even darker than it already was. We could not see any sign of civilization and since we were on our way to the language school we probably could not have communicated with anyone had they been nearby.

We sat there and prayed and eventually we saw a huge truck off to our left a good distance away that appeared to be traveling parallel with the route we had been taking. Tim took it as an answer to prayer and we set off across the flat land and began to follow the truck as it meandered across the valley floor. Slowly and in a snaking pattern the truck eventually lead us to the higher road and a small town where we were able to find a small hotel. We spent the night and finished our trip the next day without incident.

We are on a journey once again and at times we feel as if we are once again meandering around lost in the bottom of the valley trying to find our way to the high road. We are still a long way from the monthly support needed for us to reach our budget. Daylight is running out and we need your help to reach our goal; we need to raise about $2,000 in monthly support by the end of November. We would rejoice if some of you, our faithful friends and partners, would be like the truck that came out of the darkness and helped us find our way to the higher road.

You can click here to make a one-time gift or fill out a pledge for monthly support at our web site.

Thanks to all of you who are traveling along with us and helping us find our way back to Tanzania!