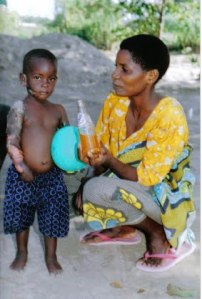 This is a picture of Elin; she is the 19 month old daughter of our night watchman, Charles.
About two weeks ago Elin tripped near the open fire in their one room house; a large pot of water was boiling on the fire. As Elin fell, the boiling water sloshed out onto her body; she was badly burned as you can see in the picture.
When Charles arrived at our home on Saturday evening he told me about Elin’s accident the night before. I asked him if she had been taken to the Doctor; he looked at me sadly and said “no”. They had taken the jar of honey I had given them a few days before, mixed it with flour and smoothed it on her burns; it was all they had. Tim was gone on a twelve day ministry trip so I had no transportation.
Charles and his family are a typical Tanzanian family; they live in a world where there is no government assistance of any kind. He has no bank account or savings account. His expenses exceed his income each month even though we pay him more than the salary required by law; he has to make difficult choices. Many times he doesn’t eat so that his family will have food; I give him food often when he comes to work because I know he doesn’t eat much.
He has 4 children; two of them in school and the other two are younger. Sometimes his children have to sit out of school for awhile because there is no money. Charles struggles to keep them in school; he did not have the privilege of going to school more than a year or so and yet he sees the importance of education for his children.
When Charles told me the story of Elin’s accident, I gave him money and sent him home to take care of her. He passed by a small dispensary on his way home and bought the items I told him he would need; pain medicine, an antibiotic, a dissenfectant to use in the water they were bathing her in and a salve to put on the burns.
When Tim arrived home a few days later he took her to a doctor at the large government hospital; he went with them to make sure she would receive treatment. It’s an advantage to have a “white” person with you at such times as this. We have paid for all the medicine and medical thus far thanks to a donation given to us by an individual on the team Tim was hosting.
Elin is progressing well and seems to be healing without complications. We pray that she will have full use of her arm and that there will be little scarring.
Her mother was tearful when she came to our home and hung her head in shame because she had allowed her daughter to be injured. I smiled and gave her a quick hug, “accidents will happen” no matter where you live in the world.
I gave Elin a small stuffed bear while she was here and was rewarded with a smile. When they left a short time later she was clutching her new toy and smiling.