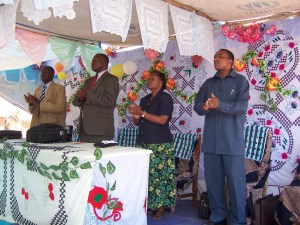 Tim, the General Supt of the TAG (Mtokambali), his wife and the National Children’s Director (Paul Meivukie) returned yesterday evening. They arrived later than planned due to the fact that this is Africa and nothing goes according to plan and few things stay on schedule.
We had thirty minutes to have supper, sort luggage and get the Mtokambali’s to the airport. We made it!!!
Tim and the team traveled to some very remote areas over rutted dirt roads; flying over the potholes and in a cloud of billowing dust as they tried to maintain their tight schedule. Everyone buckled their seat belts and held on and Mama Mtokambali could be heard praying at times from the back seat. Tim doesn’t like to travel that way but he did not set the schedule.
Everywhere they went they were greeted with celebration and showered with gifts. Most of the sections they traveled to have never been visited by a General Superintendent, National Department Director or a missionary; to have all three at one time is a once in a lifetime occurrence for these pastors/churches/leaders.
They literally returned with the Land Cruiser filled to bursting with gifts of all kinds and even had some tied on top of the vehicle. There were three piles; one for the Mtokambali’s, one for Paul and one for Tim.
There were wood carvings, bolt after bolt of material, honey, woven mats, bags of peanuts and even bags of Dagaa(minnow sized sun dried fish). Many gave what was indigenous or produced in their areas.
Everything: gifts, luggage, Land Cruiser and even the travelers were covered and imbedded with dust. It is the end of the dry season and so very dry and windy.
There are a few days of rest before they are on the road again.